Comments Off on Conference – life and times of Bert Ramelson |

After the opening of Moscow’s Comintern archives and the archives of the Communist Party of Great Britain in the 1990s, this is the first full-length study of the impact of the Communist International (Comintern) on the shaping of Indian communism. Based on materials collected from these once forbidden archives, the book also takes into consideration the private papers of Horst Krueger in Berlin, a whole range of inner-party documents and the new Comintern historiography (primarily Russian and German, apart from English) that has developed over the years. The book is the culmination of the author’s research for more than a decade on the shaping of communism in India in the Comintern period. The revised and enlarged edition of the book incorporates many new materials which have come to the surface since the publication of the first edition in 2006 and also introduces a comparative perspective, highlighting how communism developed in the countries of the East, and examines how the path chosen by the Indian communists was so different from that of the Communist Parties in China, Vietnam, Indonesia and Korea, for example.

A Malayalam version of the first edition of the book, under the title Cominternum Indian Communist Partiyum (Thiruvananthapuram : Prabhatham Printing & Publishing Ltd), was published in 2010. A German version of the present revised and enlarged edition bearing the title Komintern und Kommunismus in Indien: 1919-1943 (Berlin : Karl Dietz Verlag) is forthcoming in 2012.

Sobhanlal Datta Gupta (b. 1948), former Surendra Nath Banerjee Professor of Political Science at the University of Calcutta, has an abiding interest in the intellectual history of Marxism and Marxist theory. His recent works include The Ryutin Platform (Stalin and the Crisis of Proletarian Dictatorship) (ed.) (Kolkata: Seribaan, 2010) and Marxism in Dark Times : Select Essays for the New Century ( Delhi, London, New York: Anthem Press, 2012). Currently he is working on a three volume work on The Socialist Vision and the Silenced Voices of Democracy: New Perspectives on Rosa Luxemburg, Georg Lukács and Nikolai Bukharin. He can be contacted at sobhanlaldattagupta@gmail.in or dattagupta_s@rediffmail.com.

For overseas orders and all commercial information about the book, please contact: Sreejoni, the book’s exclusive overseas distributor, by visiting http://www.sreejoni.com. For Indian orders please contact us at: bookshopping@seejoni.com

Since the collapse of the Soviet Union a generation of historians has grown up for whom the USSR is not so much personal memory but rather an object of study. Our annual conference provides an opportunity for undergraduate and graduate students to present their research on various aspects concerning the phenomenon of the “Soviet” alongside with comments by well-known academics: anthropologists, historians and sociologists. Previous conferences were supported by the French-Russian Center for the Humanities and Social Sciences and by the German Historical Institute in Moscow (DHI). Ten best papers of 2011 were published by DHI as a book.

At the conference in April 2012 we would like to discuss the following topics:

We invite undergraduate and PhD students specializing in the humanities and social sciences to send us their short papers to participate in the conference. No remote participation is possible. The conference language is Russian.

A collected volume containing the papers will be published by the beginning of the conference. The electronic version of last year’s collection is available at http://www.eupress.ru/books/index/item/id/99.

Requirements for the papers: no more than 15,000 characters (including spaces, footnotes and bibliography); MS Word (versions 1997 to 2003), automatic footnotes. Please also include your contact information, university, department and year of education.

Deadline for submission of abstracts: March 1, 2012 at: constructing2012@gmail.com.

The European University at St.Petersburg can pay for transportation within Russia (railway tickets) and accommodation only for a part of the conference participants.

The CfP in Russian can be read at http://www.eu.spb.ru/index/announcements/4291-constructing-soviet.

Comments Off on Constructing the ‘Soviet’? conference – call for papers |

Conference hosted by UEA School of History in conjunction with the journal Socialist History: ‘Reform Communism’ Since 1945 in Comparative Historical Perspective’.

The collapse of the USSR and the Eastern bloc in the wake of Gorbachev’s perestroika seemed to show that communism was essentially unreformable. It could be preserved, dismantled, or overthrown, but it could not be reconstructed as a viable alternative to capitalism, free from the defects of its Leninist-Stalinist prototype.

Prior to 1989-91, however, reform communism was a live political issue in many countries. At different times in countries as diverse as Yugoslavia, the USSR, Czechoslovakia, Western Europe, Japan, and China, the leaderships of communist parties themselves sought to change direction, re-evaluate their own past, correct mistakes and so on with the aim of cleansing, strengthening and improving communism, rather than undermining or dismantling it. In countries ruled by communist parties this process usually involved political relaxation and an easing of repression, and was often accompanied by an upsurge of intellectual and cultural ferment.

The aim of this conference is to consider reform communism as a distinct phenomenon, which can usefully be distinguished from, on the one hand, mere changes of line or leader without any engagement with a party’s own past and the assumptions which underpinned it, and on the other, dissenting and oppositional activity within and outside parties which failed to change the party’s direction.

Selected papers will be published in 2012 in a special issue of Socialist History (http://www.socialist-history-journal.org.uk) devoted to the subject.

Attendance of the conference will be free of charge, but we ask that anyone wishing to attend registers in advance by emailing Francis King on francis@socialisthistorysociety.co.uk and/or Matthias Neumann on m.neumann@uea.ac.uk at School of History, UEA, Norwich NR4 7TJ. Any enquiries should be addressed to us.

Supported by the British Association for Slavonic and East European Studies

Comments Off on Conference: ‘Reform Communism since 1945’ |

From an occasionally employed, lower middle-class Bengali Muslim intellectual on the borderline of starvation in the city, he was to become ‘the chief accused’ at the Meerut communist trials started by the colonial government in 1929. What was the road travelled before challenging imperialism ‘from the dock’? In 1913 Muzaffar Ahmad (1889–1973) was just one more individual adrift in the sea of migrants arriving from rural Bengal to Calcutta. His ambition was to be a writer. Yet in the vortex of metropolitan upheavals, his life would take a completely different turn. Taking Muzaffar Ahmad’s early career (1913–29) as its chronological frame, this book examines the dialectical interplay between social being and a wider social consciousness in late colonial Bengal which drew a section of Muslim intellectuals to communism.

Muzaffar’s life converged with a significant phase in the social and political history of India and the world: 1913 marked the eve of the First World War, while the Wall Street stockmarket crash set off the Great Depression in 1929. During this period, especially after the success of the Bolshevik Revolution in 1917, socialist ideas and communist activism became politically familiar in different parts of the globe. In the post-First World War climate, many alienated urban intellectuals – from Cairo to Shanghai – stood at the crossroads of established identities and radical currents. Informed by working class protests from below and a leftward turn in the literary/cultural fields, many in India were also moving away from the political routes open to those from their social background to combat colonialism and identifying with alternative visions of decolonization.

By tracing this process in the context of Calcutta through Muzaffar Ahmad’s transitions, the little investigated history of the left in Bengal prior to Meerut is unravelled, and is related to the convergences between individual radicalization and the emergence of a new political space in a colonial city. The connected histories of communism, port-cities, Bengal Muslims, workers, intellectuals, youth, migration, colonial intelligence, early left organization, radical prose, local/ regional activism and internationalist currents are also probed in this context.

To buy copies of the book online, please visit:
LeftWord.com, or Scholars Without Borders.

Comments Off on An Early Communist: Muzaffar Ahmad in Calcutta 1913–1929 |

The study of communist parties globally has, perhaps inevitably, always involved finding a balance between overarching relationships with Moscow and the specific influences of a diversity of local environments in which the individual parties functioned. While recognising the importance of the former, this conference aims to address the extent to which national and sub-nation political, social and cultural traditions and developments, crises and continuities shaped the character of ‘world communism’.

The conference programme can now be downloaded here. (Updated May 27th.)

Please register to attend the conference at our online form.

The conference fee, payable by all speakers and attendees, will be as follows:

For academic and others in employment, the fee is £20.00 for one day and £35.00 for both. The registration fee covers afternoon coffees/tea and biscuits. Lunch is charged separately at £9.50 a head.

See map for the route from Cardiff Queen Street Railway Station to the Atrium. 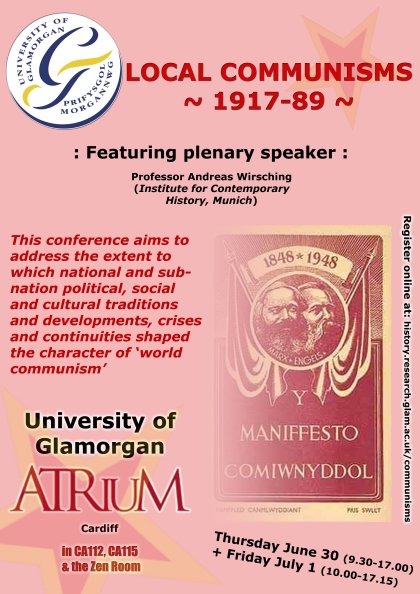 Conference: Communism and Youth in the twentieth century

10:00-11:00 – Opening address: Kevin Morgan (University of Manchester): From Infantile Disorders to the Fathers of the People: Youth and Generation in the Study of International Communism

This event is funded by the Royal Historical Society and the Economic History Society. Attendance is free but registration is required. For any additional information please contact the organisers: Matthew Worley (m.worley@reading.ac.uk); Leo Goretti (l.goretti@reading.ac.uk). More information on the Facebook event page

Comments Off on Conference: Communism and Youth in the twentieth century |

Eric Hobsbawm on How to Change the World

Professor Eric Hobsbawm in discussion on his latest book, How to Change the World: Tales of Marx and Marxism.

In his major new work, Eric Hobsbawm addresses the history of Marxism in the 162 years since the publication of Marx’s Capital and assesses its continuing relevance as a challenge to capitalism.
This event is free but places are strictly limited. As we anticipate high demand we ask that you send your details to Stefan Dickers to confirm your place.

Comments Off on Eric Hobsbawm on How to Change the World |

A conference on the sociobiography of militant activists at the Bibliothèque nationale in Paris 7-8 Dec, to commemorate the fiftieth volume of the Maitron biographical dictionary of the French labour movement and the centenary of its founder Jean Maitron (1910-1987).

Josip Broz Tito was a remarkable figure in the history of Communism, the Second World War, the Balkans and post-war Eastern Europe. He was the only European besides Lenin to lead a successful Communist revolution and became one of the most renowned Communist leaders of all time. For a certain generation, he was remembered as someone who stood up to both Hitler and Stalin – and won. Tito was above all else a communist, and was devoted to the communist cause until the day he died. What made him different from other communist leaders was that his early experience of Soviet Russia had given him sufficient knowledge of the Soviet experiment to be wary of its spell. In this, the first post-communist biography of Tito, the acclaimed historian Geoffrey Swain paints a new picture of this famous figure, focusing primarily on his Communist years. It will be essential reading for anyone interested in Communist and Eastern European history.

Comments Off on Tito: A Biography – Geoffrey Swain |