1989-2009: The East European Revolutions in Perspective

Organised by: Debatte. Journal of Contemporary Central and Eastern Europe

Debatte is marking the twentieth anniversary of the revolutionary upheavals of 1989 by inviting scholars and students of Central and Eastern Europe to reflect upon the events of that year, their causes and processes, and the ensuing transformation of the region. In line with Debatte’s credo, the conference encourages critical and inter-disciplinary contributions. Especially welcome are papers that:

Promising areas for papers include:

Submission of a panel proposal: The proposal should be no longer than 500 words, and should include the panel convenor’s full name and e-mail address, as well names and e-mail addresses of at least two other panel participants.

Questions, as well as submissions of panel proposals and abstracts, should be directed to Gareth Dale,
For updates: http://www.tandf.co.uk/journals/titles/0965156X.asp 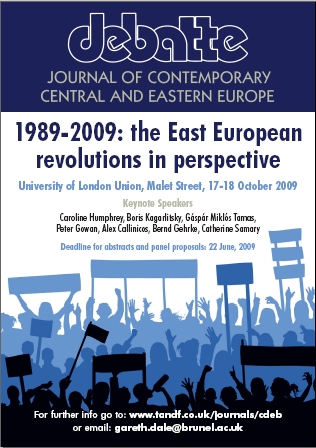 This entry was posted on Monday, May 4th, 2009 at 5:12 pm and is filed under Conferences. You can follow any responses to this entry through the RSS 2.0 feed. Both comments and pings are currently closed.